New Rochelle’s Library Foundation was established in 1993 on the occasion of the library’s 100th anniversary.  A Centennial Committee was established to kick off the creation of the Foundation, chaired by renowned author E.L. Doctorow, a New Rochelle resident and library advocate. The Foundation was officially launched with a Gala Centennial Celebration on April 30, 1994, featuring prominent New Rochelle residents including Louis Rukeyser, Cynthia Ozick, Frances Sternhagen, Robert Merrill, Ossie Davis, Ruby Dee and E.L. Doctorow.  Along with many other attendees, these well-known personalities shared the belief that a vibrant library is an essential component of a culturally dynamic city like New Rochelle.

The Foundation Meets the Challenge

In 1993 the economic challenges were great.  At that time, the library’s funding was so precarious that even the purchase of new books and periodicals was in jeopardy. To meet these needs the Foundation was established as a 501(c)(3) charitable organization. The Reach for Tomorrow  Campaign was the Foundation’s first major project, launched in the late 1990’s to renovate the entire 2nd Floor – the very heart of the Library – and to build an endowment fund for the future.

Since 1993 the Foundation has been there to fill the gap between the Library’s needs and taxpayer support, making sure the facility and programs stay up-to-date and able to meet the needs of New Rochelle’s residents.

To date, the Foundation has raised more than $3 million and has established a $2 million+ endowment fund to ensure the future of our Library and provide an ongoing stream of funding for new and emerging needs. In addition, stepping in as a matching funder, the Foundation has been able to leverage its support to bring in an additional  $694,000 dollars in New York State grants over the past 5 years.

As technology has advanced, the Foundation has focused on updating the Library facility, computers, software and programming in an effort to ensure that modern technology – today’s door to information and resources – is accessible to all.

A Short History of Our Library

Since 1883, the NRPL has had five homes. Originally located in the Trinity Place School, it then moved to 40 Centre Avenue, where it soon became too cramped to meet circulation needs. In 1901,the Library leased two floors in the Masonic Building on Main Street and LeCount Place.  As New Rochelle’s population grew, Library circulation continued to boom. A grant from Andrew Carnegie in 1914, in the amount of $60,000, allowed for the construction of a brand new library at Pintard Avenue and Main Street, where the library remained for 65 years. (That building was just designated a Historical Landmark.) The NRPL moved to its present quarters, a refurbished parking garage, on Library Green in September of 1979. Its innovative design resulted in an Award of Excellence for Library Architecture from the American Library Association.

An Eye on the Future

Our Library has been an invaluable community resource since its founding. As our environment changes, the Library must continue to adapt its services to ensure that we can maximize our ability to connect and educate the community. The recent pandemic has accentuated the disparities in our diverse community, as remote access to learning as well as other resources has become essential. The Foundation’s mission remains committed to helping New Rochelle close the digital divide, ensuring that all community members can access the tools they need to succeed and continue to learn and thrive. 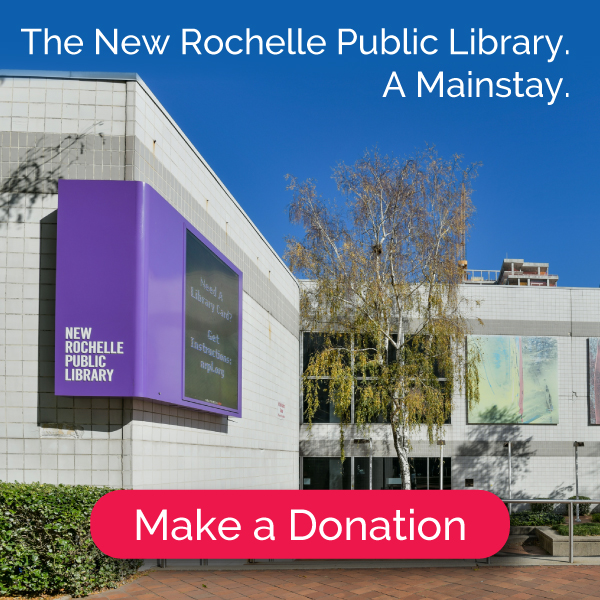 Our mission is to keep the Library vibrant, up-to-date, and able to serve the diverse needs of the New Rochelle community. To Provide this ESSENTIAL SERVICE we need the support of donors like YOU.

The New Rochelle Public Library Foundation is a nonprofit organization that raises resources and provides advocacy to keep our library vibrant, up-to-date, and able to serve the diverse needs of the New Rochelle community.

The NRPLF is a 501(c)(3) tax exempt organization. Our Form 990 is posted on www.charitiesnys.com and is available for public inspection. Our Federal Identification No. (EIN) is 13-3712927; New York State Registration No. is 05-81-13. Please contact us at nrplfoundation1@gmail.com if you have any questions or would like additional information.